Thinking ahead! How do we ensure we have enough teachers?

Thinking ahead! How do we ensure we have enough teachers? 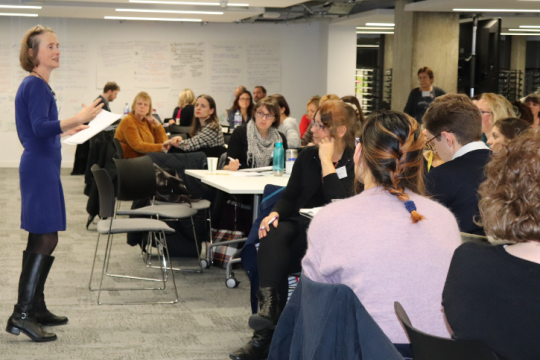 In January, Bernardette Holmes, writing about languages for young learners in post-Brexit Britain, suggested that language learning is now of increased importance. It is indeed crucial now that we prepare our young learners to be culturally aware, linguistically able and economically literate if we are to participate on the world stage.

A coalition of organisations including the British Council has engaged with the British Academy’s call for a national strategy to enhance engagement with the rest of the world, declaring that ‘monolingualism is the illiteracy of the 21st century’, and the All Party Parliamentary Group on Modern Languages has called for a National Recovery Programme for languages (Tinsley, 2019: 02). Since 2018, the Government has re-stated its ambition for 90% of pupils to sit a G.C.S.E. in a language by 2025 and has set up The National Centre for Excellence for Language Pedagogy (N.C.E.L.P.). There are 18 Specialist Teachers in nine Lead Schools, each working with four local Hub schools (45 schools in total), as well as with a wider network of a further 90 schools linked to the Hubs. There clearly is a need to reverse the current trend, as over the past five years, there has been a 19% reduction in entries for G.C.S.E. languages, with French and German each seeing declines of 30% over this period (Tinsley, 2019: 03).

This surely means that primary schools have a key role to play in giving young learners a head start and the engagement and motivation needed to carry them through the three compulsory years of foreign language learning at secondary level (ages 11-14) and create the desire to keep them studying languages.

However, none of this can happen without the teachers. Critical to the supply of teachers, of course, is teacher education, both I.T.E. and C.P.D. While C.P.D. is vital, as Florence Myles and Bernardette Holmes (2019) outline in the White Paper, it is also crucial that our beginning teachers are equipped to teach languages. One issue is having sufficient teachers, whereas another is the quality of the teaching staff. It is vital that they feel confident and competent to teach languages. Yet we know that the decline in take-up of G.C.S.E. and A level languages means that few of our beginning teachers, whether undertaking an undergraduate teaching degree or a P.G.C.E., have the subject knowledge necessary to teach a language.

Those doing a P.G.C.E., apart from the small number that may have done a languages degree, are often years away from their own school study of language. Indeed, if they only studied a language between the ages of 11 and 14, and arrive to do a P.G.C.E. at age 21 or later, it is likely that much, if not all, has been forgotten. But the constraints of a P.G.C.E. year throw up real challenges, as of a 36 week course, only the equivalent of 12 weeks is spent at university. School-based training in this area of the curriculum can founder on the lack of expertise of the school-based trainers. An undergraduate teacher-training course of three years offers a little more in terms of university contact time but the school-based issue remains (Macrory, 2019).

How do we break this vicious circle? We need all those thinking of a career as a primary school teacher to be thinking ahead.

All of this clearly presents challenges, but by developing teacher education, we increase the possibility of young learners leaving primary school with an appetite for further language learning. In a few short years, they in turn will be the primary teachers of the future. We all need to think ahead!

We're a group of researchers, teachers, teacher educators & policy makers investigating & reporting on the use & learning of languages in primary classrooms.

The #DELTEA team would love to hear about your experiences in the #MFL classroom: what opportunities and challenges do you face?

Let us know via this anonymous questionnaire: https://soton.eu.qualtrics.com/jfe/form/SV_cUy5CGCtGFvBQA6

☕️ JOIN US! ☕️
Are you a state school #primarymfl teacher in England or Scotland? Does your school teach French or Spanish to Year 5/P6 pupils?
Digital Empowerment in Language Teaching (#DELTEA) is looking for school partners to work with over our 3-year research project!
(1/3)