Research and the future of primary languages

It was the 2002 National Languages Strategy which put on the map a revived commitment in England to the promotion of primary languages. The Strategy offered three main grounds for investment in this particular curriculum innovation, namely that it would:

1. promote and sustain interest and motivation for language learning;

2. promote intercultural understanding and an international outlook among schoolchildren; and

From the National Strategy followed significant investment in Pathfinder projects, in local authority support, and in development activity led by CILT and QCA, culminating in the publication of the Key Stage 2 Framework for Languages in 2005.

But was the Strategy working? 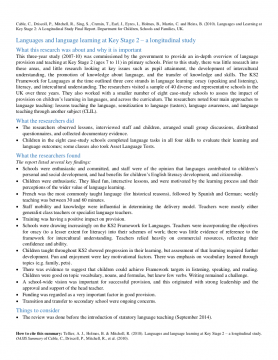 To find out, the Department for Children Schools and Families (DCSF) commissioned broad survey research led by the National Foundation for Educational Research (Wade et al., 2009), and a 3-year longitudinal study of languages innovation in 40 schools led by the Open University (Cable et al., 2010, 2012).

Survey research continues to this day, through the important – and sobering – “Language Trends” series (Tinsley, 2019). But 10 years on, are there continuing pointers from the longitudinal “40 schools” study, for the ongoing research we need, to support and develop primary languages in challenging times?

The schools taking part in the 40 schools study were a reasonably representative national sample, except in one respect: they were “early adopters” of primary languages, i.e. they were actively developing language teaching in Key Stage 2, ahead of any national compulsory requirement to do so. They therefore provided valuable evidence about the strengths and problem-solving capacities of motivated schools, but also about the challenges faced even in such schools.

Regarding children’s motivation, the 40 schools study showed that the enthusiasm of the teachers, and their provision of a varied, oracy-centred pedagogy supplemented by contacts of varied kinds with native speakers, was reflected in children’s generally positive attitudes and enjoyment. However, particularly among older children, where the languages curriculum remained disjointed, topics were repeated, and there was no strong sense of progression, some frustration was found. More recent substantial research on motivation, by Suzanne Graham and colleagues at Reading University, has confirmed these understandings of children’s motivation, and the vital influence of a sense of progression in sustaining children’s engagement with languages in the longer term (e.g. Graham et al., 2016).

Regarding intercultural understanding, it was a striking feature of the study how far head teachers in these innovative schools were motivated by an overarching strategic commitment to international education. For example, participating schools often not only had partner schools in European country relevant for the  language they were teaching, but also had active links with schools in the developing world. Class teachers typically shared and expressed this strong commitment to intercultural understanding. However, the researchers found these views were not systematically translated into classroom practice, where intercultural experience was fairly limited (e.g. to learning about food or about festivals). Recent international research suggests that schools and teachers still lack a clear sense of how far intercultural understanding can be developed in the primary school languages context, and of the kind of pedagogy which will promote this (e.g. Howard et al., 2019). In this domain, wherever innovative practice is taking place currently in our schools, we need to document it and share the evidence on what is learned. A series of action research studies could contribute greatly here.

Finally, regarding linguistic progression, eight of the 40 schools in the study agreed to formal testing of their Key Stage 2 pupils, over the 3 years of the study. The findings from these schools presented a picture of fairly modest achievements, mostly in oral skills (reflecting the oracy-led pedagogy observed). However, a clear feature of the data was of change and development, both in teachers’ expectations of their children and in the levels of children’s attainment, as the research study progressed from year to year. That is to say, as the subject became more clearly embedded in the curriculum, as longer term schemes of work were developed and teachers became more confident, attainment was on the rise. Again, more recent research has confirmed that consistency of provision, including adequate teaching time, and teachers with some specialist expertise and linguistic skill, are essential to promote progression (e.g. Graham et al., 2017). But given these baseline conditions (e.g. 60 minutes’ teaching time per week, a scheme of work covering all of Key Stage 2, consistent staffing), how far can children travel, in terms of linguistic proficiency? Are the linguistic goals expressed in the current (2014 ) National Curriculum actually at 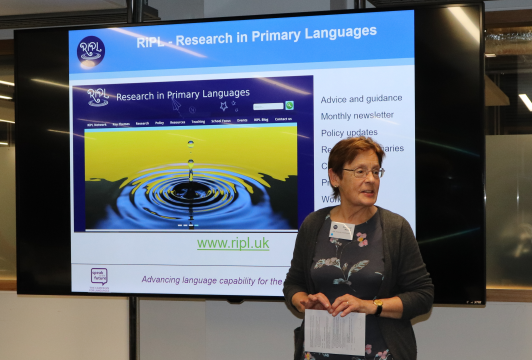 tainable? Subsequent research is patchy, so that we do not really know, yet we  need to, if the subject is to defend its place in the curriculum in the longer term. This is a central question, and once our schools are fully back in action, it should be a main focus of research.

And stay safe everyone!