A few years ago my wife and I were approached by The Premier Academy primary school in Milton Keynes, England’s first outstanding academy convertor, with an interesting proposition.  Our brief was to build on its reputation for specialist teaching and develop an already established Spanish department.

The Premier Academy has always seen itself to be part of a global community which is slightly ironic with Brexit looming, especially for two Europeans!

The Head, Warren Harrison, told me at the time that he believed South America would open up in our lifetime and that it was only fair that we gave our children every chance to succeed, not just locally on a micro scale but on a macro scale.

My view was that with Spanish overtaking English in terms of number of native speakers, being equipped with the two languages would be advantageous in life. 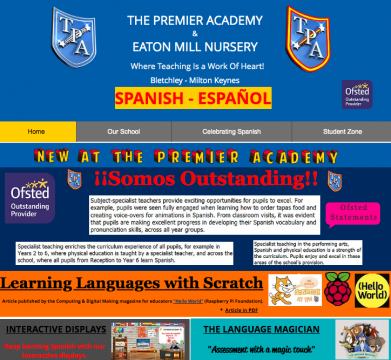 As an enthusiastic user of technology in the classroom, my original plan was to create a resource bank for students with links to other online learning sites however our Spanish website soon began to evolve into a place where we could celebrate achievements, share our ideas and successes in Spanish, post videos and apply gamification in the classroom. For anyone who doesn’t know, gamification is the application of game-design elements and game principles in non-game contexts.

We also now post news about the school, What’s On information, topics, a Spanish art gallery, and a Student Zone section with resources for children (videos, games, interactive displays, activities and exercises, etc.).

During our last Ofsted inspection the Spanish department received four mentions, my favourite was:

“Subject-specialist teachers provide exciting opportunities for pupils to excel. For example, pupils were seen fully engaged when learning how to order tapas food and creating voice-overs for animations in Spanish. From classroom visits, it was evident that pupils are making excellent progress in developing their Spanish vocabulary and pronunciation skills, across all year groups.”

The school is incredibly cross curricula and as one of the two Spanish teachers, I cannot extol enough the virtues of Modern Foreign Language teaching. The children meet Spanish from the age of three, it helps their English grammar, it allows them to explore another culture, and of course it may one day open a door or as we say, “¡Abrirnos las puertas!”.